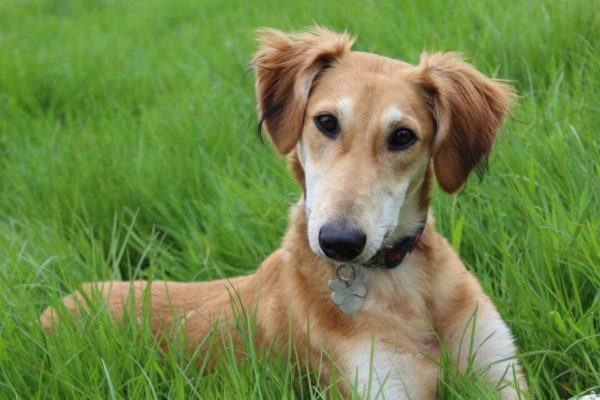 
In January we received a late night call about a Saluki pup on the streets of Tuam with a badly broken leg. Only 4 months old he was a pitiful sight and screeched in pain and fear as we maneuvered him into our van, arriving at our vets after midnight.

A few days later Tetley, as he was now known, underwent extensive surgery under the care of James Dunne. And so began the long and tedious task of making sure Tetley was kept quiet and calm as his 8 weeks of kennel rest began. Anyone who works in rescue will know that it is rehabilitation that is the hardest, especially with a young pup like Tetley.

At first he seemed content to lie in his comfy bed going out four times a day to toilet and grab some much needed socialising time. But as the weeks went on Tetley became increasingly agitated at having to be confined, so our team had to work even harder to find ways to keep him entertained, all the time praying and hoping that we had done enough to help his leg heal.

Some days his cries of frustration rang loud across our sanctuary but we learned to harden our hearts and block them out, keeping an image of a fit and mended Tetley running in our fields firmly fixed in our minds.

It was that image that got us through the tough days. Weeks turned to months and by now Tetley was taking short, controlled (not easy 😀) walks around our fields building up to the day when we could watch him run free on all four legs. His plates then got infected and were removed and once again we started the slow task of building up wasted muscle.

By now Tetley had become accustomed to being left behind when his friends went off on bigger walks and outings though we always made sure he had company when left, until he finally got the all clear.

There was quite the audience that morning as we walked Tetley into our back field for his first ever off lead run. He was now nearly 8 months old and for half of his life he had never known the joy of running free. We watched tentatively as he took his first steps unsure what to do until he realised he could run!!!

And run he did with the biggest, goofiest smile on his face and the team who had minded him, carried him, held him and loved him throughout his recuperation, well we all smiled too.

Tetley could now join in on our many sanctuary outings and he wasn’t long making up for lost time. We took him on as many walks as we could introducing him to the outside world he knew nothing about.

His fear of cars had to be worked on, as did his lack of manners 😂 and he received many tellings off from his friend Cady, the terrier, as he bounced on her head, completely oblivious to doggie etiquette 😂😀 Not that he cared as he was having the time of his life!!!

Knowing his time with us was coming to an end, we packed as much fun into every walk with Tetley and today I think it’s fair to say that a little piece of all our hearts went with him as he started his journey across the Irish Sea to his forever home.

Tetley we have watched you grow from the scared baby in pain to the most beautiful (and naughty😂) teenager that left us today. We never, ever lost that image we embedded deep in our minds of you running in all your Saluki glory, painfree and healthy. There were days, plenty of days when we felt as frustrated as you did but we kept our focus and just look at our reward.

We are so very proud of you Tetley for hanging in there when times got tough and you, like us, never gave up.

Have the most wonderful, fun filled life sweet boy and keep a little piece of your big heart filled with the memories of us and our time together here at Heathlawn. You will always remain in ours.

Our thanks to our dedicated vet team at Railway Vets, to the wonderful surgeon that is James Dunne, to our own dedicated team of staff and volunteers, our friends at Erinhounds Sighthound Rescue UK and to Tetleys foster family who await his arrival tomorrow and finally his forever family who he will soon be meeting.

Keep on Rocking the World Tetley ❤