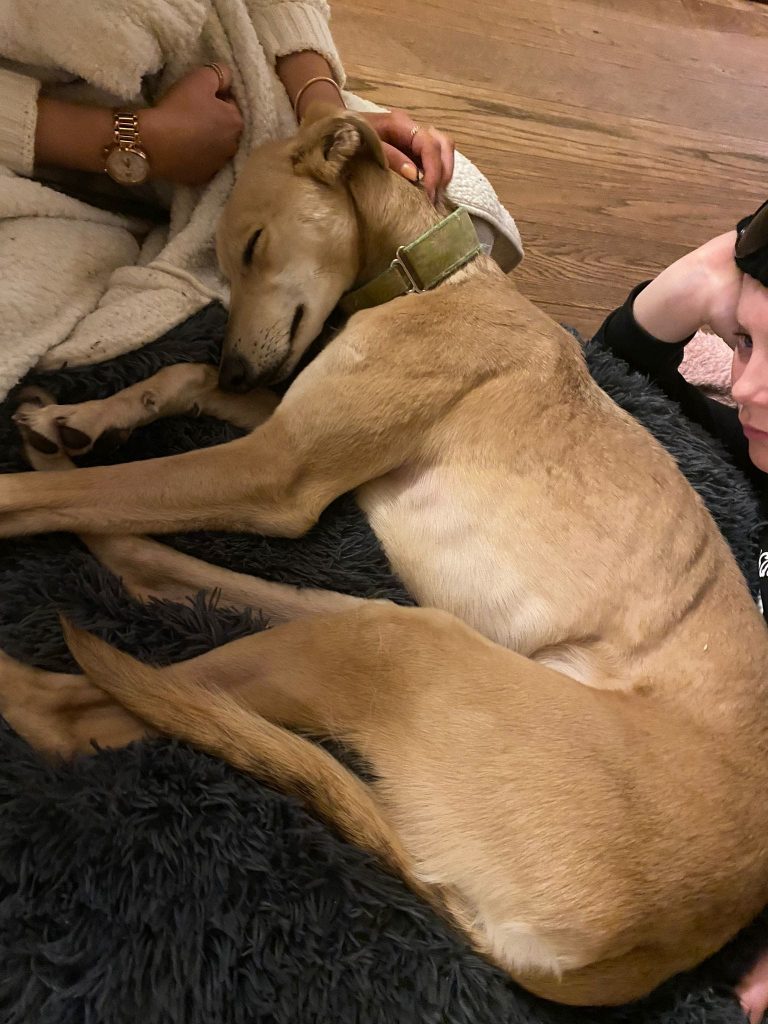 
In early August 2021 we received a call about a little lurcher boy, in Tuam, with what appeared to be a broken leg. He was collected by us and brought straight to our vets. We named him Sheridan and he embarked on the long road to recovery. During his operation pins and plates were inserted and the slow and painful process of rehabilitation began. Sheridan had weeks and weeks of kennel rest and was then allowed to build up to 5 min walks, increasing every week, until Sheridans new Xrays showed that his leg had healed perfectly. He could now run free and run he did alongside his friends.

Then came an operation to remove the plates as they had started to irritate his leg causing him to be lame. He went back to walking on a lead until he had healed. At times, it seemed like an never ending wait to get Sheridan fully healed but in between those last frustrating weeks was a glimmer of hope. We had received an application from a lady called Louise, in the UK, who had applied to adopt one of our lurchers. We immediately thought that she sounded just perfect for Sheridan, plus Louise already had a 3 legged Bichon and Sheridans best friend at Heathlawn was Amica, a 3 legged terrier. Louise and her family lived very close to our good and trusted fellow houndie friend, Kim, which meant a homecheck could be done and Sheridan would also have Kim as his back up.

Many texts, calls and photos were exchanged with Louise and, like us, she thought Sheridan sounded perfect and she was already in love. We hit a few more obstacles in trying to secure transport for Sheridan to cross the Irish Sea but finally on Wednesday it was his day. There were lots of mixed emotions after caring for Sheridan for 7 months but we knew that he was heading to an amazing home with a family who couldn’t wait to welcome him and love him every bit as much as we had.

Sheridan arrived yesterday afternoon to his new family and he was a little unsure and overwhelmed, which lasted all of half an hour

It takes a chain to bring dogs like Sheridan full circle and we are just a link in that chain. There are so many people to thank for making sure our boy got to make it home, including you our wonderful supporters who, as always, didn’t hesitate to donate when Sheridans plea went up. We are truly grateful to everyone on our long list. Our staff and volunteers who spent 7 months ensuring Sheridan got through every up and down. Brittas Vets, Railway Vets, Kim for being our UK back up and, most importantly, Louise and her family for opening up their hearts and home to a little boy who had been so cruelly left on the streets with a damaged leg and little hope.