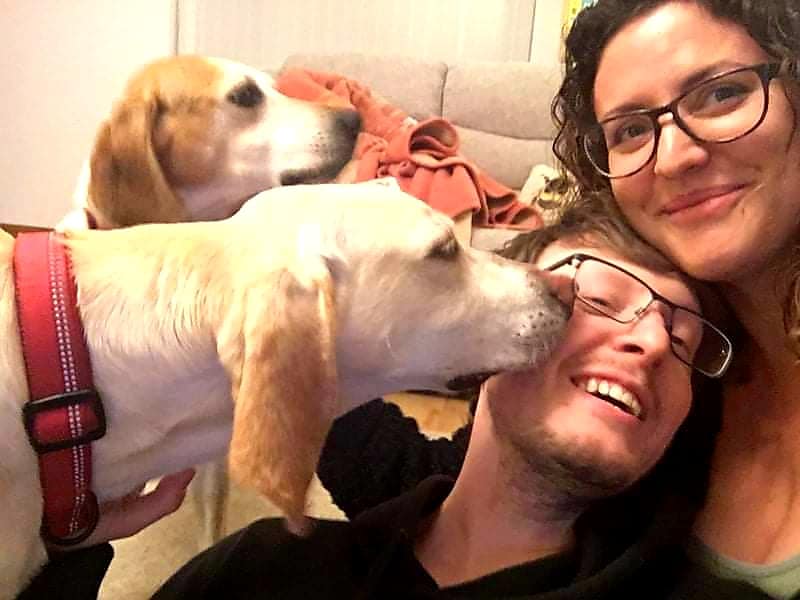 
In July we received calls about two foxhounds that were straying but then the trail went cold. One turned up in a ladies garden and she was secured and came to Heathlawn. We named her Muse. A few days later we received a photo of the second foxhound but by now she was many miles away from her original area (where Muse was found). Again her trail went cold until she also was found by a kind family who took her in and contacted us.

The next day we were delighted to be able to reunite the two best friends and we named our newest arrival Ponder. The girls had an obvious bond and after having been through such an ordeal together we felt it only right that we did everything we could to keep them together forever. Last week we kept our promise to Muse and Ponder as we waved goodbye to them as they set off to their forever home TOGETHER

Stephanie and Liam had seen Muse and Ponder and fell in love. After reading through what they could offer the girls we just knew we had found the perfect family for their needs and requirements. The girls arrived at their new home last Saturday. They have been slowly introduced to the many new things they will now encounter and are doing really well. Muse and Ponder have taken to home living and its comforts like ducks to water and are simply having the best time, together. They started off as a family of two just them against a cruel and scary world. Now they are a family of four, loved and safe for always.

It took a team of people to give Muse and Ponder their dream. We would like to thank everyone who played a part .

To Stephanie and Liam, the biggest thank you for giving these girls the most wonderful life