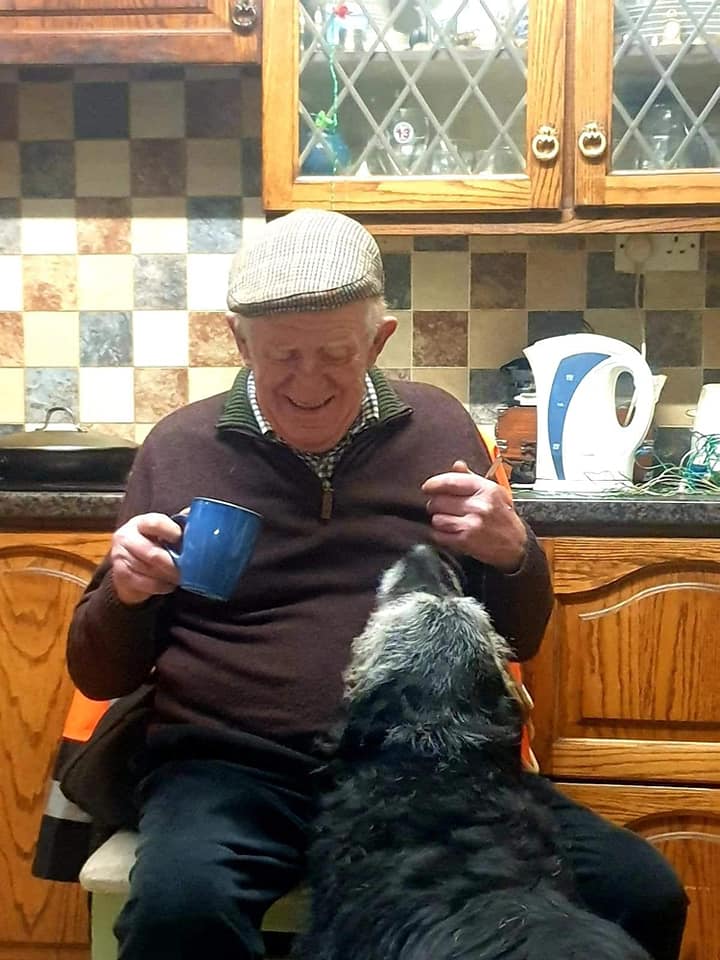 In September of 2018 we were asked to help a dog in a pound. His owner had passed away and this boy found himself alone. He was obviously scared and confused after having lost the most important person in his life. We were told he had been reported to the local warden because he had bitten someone who had entered the property and was then subsequently taken to the pound. On hearing this we felt we could understand Pepe’s reaction. Alone, bewildered and frightened he had simply lashed out in fear. We felt, due to his sad circumstances, that he deserved a chance.

We collected Pepe and it soon became very obvious that this was a boy who had lived a very sheltered life. Loved and cared for by his previous owner but he probably had never left his home. It was a huge battle to get him on our van but we succeeded and set off for Heathlawn.

As the weeks and months passed we sometimes wondered had we taken on a dog that was so set in his ways and we wondered if we could mould him back into the outside world. He showed aggression towards other dogs and definitely didn’t like doing anything he didn’t want to and he wasn’t afraid to let us know when we had overstepped the mark. He became what is fondly known in rescue as a “sticky dog”. Pepe was never going to suit the majority of homes due to his quirks and we felt putting him out into a busy world may just be setting him up to fail. We needed a certain type of home that is, at times, just impossible to find. Months turned into a year and somewhere along the way it just seemed nearly normal that Pepe was still staring out at us from his kennel. We had tried quite a few times to rehome him via social media but the calls were few and far between and any we did receive just weren’t quite what he needed. Somehow, if we are honest, Pepe got a little lost in our busy, hectic sanctuary. Many dogs came and went, yet one grey hairy face always remained. And the fact that Pepe seemed quite content with his life at Heathlawn made it a little easier for us to bear. At times we had resigned ourselves to thinking he may never leave. Then we realised Pepe had been with us for nearly 14 months virtually unthinkable for us to have a dog in our care for such a long time without having found them their forever home.

So we started Operation Pepe. We gave up days off, lunch breaks and started to introduce Pepe to the big outside world and to the simple things in life. We brought him into our kitchen at lunchtimes so he could see how houses worked, just little things to some but each one a lesson for Pepe and knowledge to us. We worked at getting him in and out of van’s and cars until eventually we couldn’t stop him jumping into any open car door!! We took him out to places at quiet times until eventually we were arranging for him to have meet ups in the local park, we had staff members bring their dogs out to pass him by as we needed to see if some of his old triggers were still there. Eventually we came to realise just how mellow Pepe had become through time and the work of our team. He had developed such a loving nature, a kindness, a need to please us and enjoy human company. He now tolerated many dogs and had even made doggie friends but still disliked others. So we tried yet more homing posts. A few enquiries but still not any that we knew Pepe wanted and needed. By now it had been 2 years since Pepe arrived through our gate and it started to bother us. But by this stage we had learned so much more about Pepe, we had pushed his buttons and got positive feedback. Pepe was now as ready as he could ever be for his forever home, but it had to be right. We were determined not to set him up to fail nor did we intend to give up the search. Not now, not after Operation Pepe.

And then came that call in November. Our kennel manager knew, 2 minutes in, that the feeling in her gut was telling her THIS WAS IT. Lisa and her family were looking for a suitable dog for their dad, a man who was used to bigger breeds and now lived alone and after the loss of his previous dog just wanted a “best friend” again. For Pepe we had held out for the perfect match. A match as close as to what Pepe had known in his previous life before ending up in the pound. A life that he had loved. Just him and his dad together. From what Lisa told us about her dad and his daily life, it was exactly what we had waited 2 years for. After completing his homecheck we owed it to Pepe to bring him to his new home ourselves and we wanted to make sure our gut feeling was right, we had a need inside us to sit and watch Pepe meet his new dad Philip. After 10 mins in his new home, with his new dad, our two team members who had chauffeured Pepe said “we were invisible to him, he was sitting in front of Philip listening to him talking, gazing up at him and we could have left without Pepe even knowing”

All our doubts and fears were erased in those few short minutes and a whole sanctuary awaited an update we breathed a huge sigh of relief. Pepe was finally where he was meant to be.

It has been over a month now since Pepe left us and we hear that Philip and Pepe make an amazing team. They potter around all day together, inside and out, they build engines and fix things with tea and biscuits being an important part of their day too

Wherever Philip goes, Pepe goes. Two older gentlemen who now live as one both needing a buddy, best friend, a partner in their lives and somehow their paths crossed and we firmly believe Pepe and Philip were just meant to be.

Whilst 2020 threw us many obstacles and heartaches, for those of us at Galway SPCA, 2020 will always be the year that two soulmates found one another.