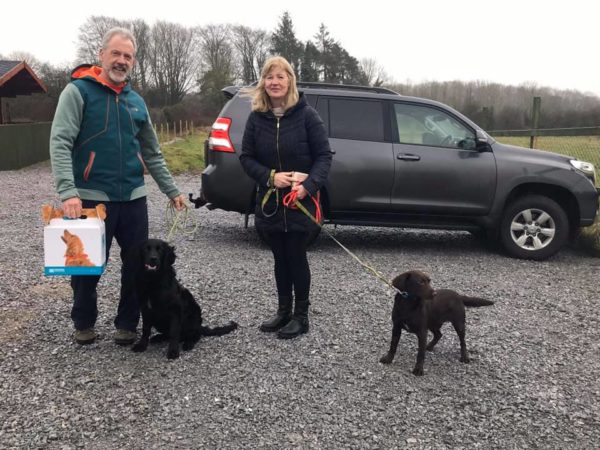 
Earlier this year we received calls about a small, chocolate lab x that was straying around the streets of Galway City for quite some time. Anytime someone tried to approach him he would flee in terror.

But as the days turned into a week he started to slow down through exhaustion and our team, with help of some kind people, managed to corner him.

Muchove was an extremely wary and scared boy, humans terrified him but he loved other dogs and he was soon running around our fields with his new friends. It took us weeks to get a lead on him and when we eventually did he completely freaked out, so again we used his doggy friends to show him the way. Slowly, but surely, Muchove started to understand what we were asking of him.

He had a sweet nature and so badly wanted to be our friend but his previous experiences held him back for so long. But we kept letting him know we were there for him and bit by bit he started to trust us.

A few weeks ago Muchove took the biggest step of his young life as he placed his trust in Margaret and Martin who had met him and felt that, along with their dog Aero, they could give Muchove his forever home.

Thank you to the families who choose to adopt the dogs that to many are a “little less adoptable” but to them are worth the extra work.

Thank you Margaret and Martin for giving Muchove the chance he deserved.