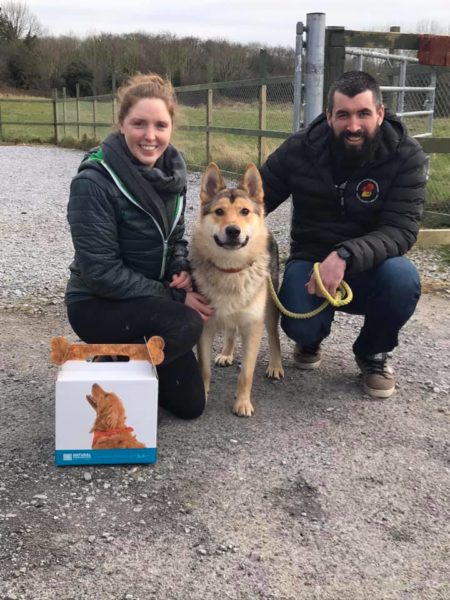 
Montreal arrived to us, in August 2019, from Mullingar Pound. A beautiful Husky x Gsd boy who had a huge affectionate heart but few manners. A sensitive soul who could be wary around people he didn’t know, especially men.

Everyone who knew Montreal loved him but as time went on he started to find kennel life hard and extremely stressful. To keep him as happy as we could, Montreal would often be seen heading off on long road walks to relieve his boredom…he loved those walks.

We had a number of enquiries for Montreal but unfortunately we felt they just weren’t perfect homes for him. Until a few weeks ago when we were contacted by Oisín and Fiona, a young couple with dog experience and a love of the outdoors.

A meeting was arranged and, due to Montreal’s sensitive side, we made sure that first meeting was carefully planned with Oisin and Fiona joining in the walk but ignoring Montreal until we felt he was relaxed in their company. Well he must have known because, ten minutes in, Montreal was all over both Oisín and Fiona just delighted to be their friend.

It has been a couple of weeks since we waved goodbye to our handsome boy and Montreal (now Monty) has settled in really well. He is still work in progress in some areas but he has a new mum and dad who are willing to put in the work and training he needs. Enjoying long walks and mountain hikes, Montreal is loving every moment of his new life.

There is someone for every dog and sometimes we just have to say no until we know deep down that we have found the most perfect match for each of our dogs. Montreal you had to wait a little longer than some but we found you the best.