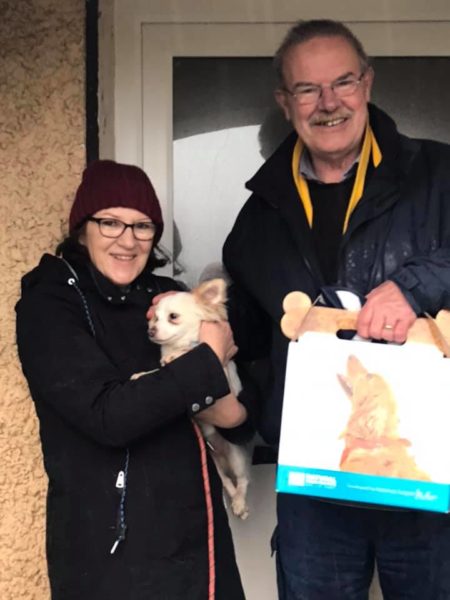 
Back in October, just after Ballinasloe Fair ended, we received a call about a tiny dog, living as a stray just outside the town.

We asked the caller to set up a feeding routine and a bed in her shed, to entice him to stick around as this little fella was absolutely terrified, running anytime he saw people. Once he seemed settled and was coming and going regularly to her shed, we moved in. It took a lot of coaxing and minding of our fingers but eventually we had him !! San Miguel was reborn !!😂

And what a character. Miguel may have been a teeny tiny chihuahua but in his mind he was a wolf, someone to be feared 😜 All fear based but that didn’t stop Miguel trying to bite the ankles and fingers, actually any bit of your flesh he could grab 😀 if he didn’t know you. With those he knew and trusted, Miguel was just the sweetest, most loving boy, his heart was huge when it came to showing his love to his friends.

Homing him was tricky. Being cute looking and small, he had plenty of admirers but to be honest most didn’t get passed our front door!!! And if they were brave enough to enter further, the sight of Miguel screeching and snarling at them was enough 😳 But we knew there was someone out there for him. Someone who would see past the defence he so bravely showed, yet the reality was that he was just scared and untrusting.

So we put in a little extra, taking Miguel out and about on trips to the local cafe Blas in Portumna for coffee. We even brought him to Dublin Airport, as we waved goodbye to one of our volunteers, to show him the world wasn’t such a scary place after all.

So many kind people enquired about Miguel, all offering loving homes but each time we just felt it wasn’t quite the right family for him and so the wait continued. Until last weekend when we chatted over the phone with Mary and Frank. And we started to have that gut feeling, had we really found Miguel’s forever parents??

A visit was arranged for last Sunday and it went just as we expected😃 with Miguel screeching rude words at them, in his bid to keep these strangers at a distance. But Mary and Frank weren’t going anywhere and they sat quietly talking to him and letting him know they understood his fear. Having had fearful dogs before, they knew it was all an act to hide his painful past.

Thankfully it didn’t put them off and today when they arrived to collect Miguel it was like he knew. He still greeted them with his usual way of greeting strangers but this time he seemed to sense something was different and after a couple of minutes, Miguel was up in Mary’s arms being smothered in kisses and loving it!!!!❤️ Dad Frank did get the stink eye for a second but again Miguel just seemed to know this was it and was happy to be rubbed.

We are so thankful to the wonderful couple that is Mary and Frank for also seeing what we saw behind the mask. A lovable, cheeky, fun loving, adorable little boy who just wanted to be loved.

Miguel, for such a tiny boy, you have left a big gap in all the hearts of those at Heathlawn who have loved and cared for you. Have a wonderful life and try to behave….just a little😜