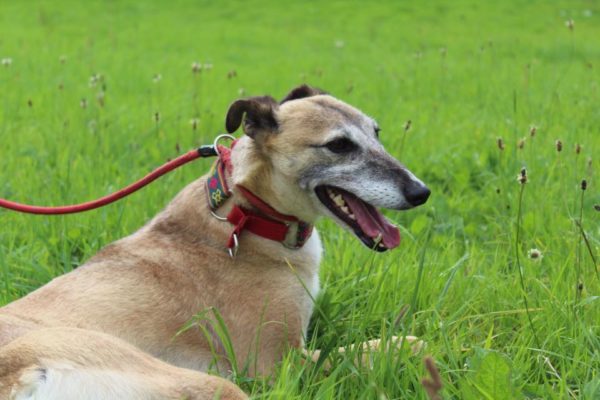 On April 20th we received a photo and a message about a terrified lurcher who was straying in Loughrea and running, in fear, anytime anyone stopped or tried to coax her over.

And so it began.

With people ringing in any sightings, we set up a feeding station in a regular ‘spot’ she went to but every time we thought we had found ‘her spot’ she would disappear for a few days.

We scoured the town in our cars and on quite a few occasions met her but she was in constant flight mode and we were never going to be able to keep up. Calls, photos and messages kept coming in yet we always remained ten steps behind her.

She started to appear on a road that was so very dangerous for her. She moved more slowly with her head hung low but with any attempt made to approach her, her fear instinct kicked in and she fled. But we were not giving up and kept our search and plans low key, while keeping ourselves focused and positive. She was coming to Heathlawn one way or another.

We got a call that she was on the slip road to the motorway. We had her in our sights. She disappeared under a gate into a field that we knew she used and our team of five gathered where we could see her in the distance, eyeing us all suspiciously.

Our next step is always the most difficult one and one we don’t make lightly. We chose to use sedation. It is not our preferred method but we were desperate. With the team in place, a whatsapp group set up and phones on silent, we went to work. She quickly ate the chicken and we waited, from a safe distance.

We have seen Lurchers drop after ten minutes while some take up to an hour but this girl gave us a long and troubled afternoon. She fought hard and with long grass everywhere we lost sight of her on many occasions. We knew that couldn’t let her out of those fields and after four hours we found her lying in a ditch covered with trees brambles and briars. By now she was unsteady on her feet but her instinct to flee remained. We got into place and began our attempt to finally catch her.

And we did. Prairie was safe in our van.The dirty, tight collar was removed and the promise of an amazing future made. That was on May 27th, after 5 weeks trying to catch her.